In December 2016 I entered the 2017 Dirty Reiver. At that time the Dirtbags were just a twinkle in my eye, MMMMM rides were being planned but not yet started and NTR had no official Off Road wing besides a few hard core cyclocross riders. I was the only rider from NTR in April 2017 to take the line, and one thing I came away with was a plan to get more people involved in gravel rides and ultimately get at least 3 or 4 other riders along to the 2018 edition of the Dirty Reiver.

Fast forward a year, the Dirtbags is a fully fledged wing of NTR with it’s own Facebook and Strava page as well as dedicated off road kit! Marky Marks Muddy Monday Meanders is settled in to being the bedrock upon which training for the Dirty Reiver is set and after a good many white lies about how easy the DR is, 12 NTR members entered, little in the knowledge of what an immense day they would have (besides yours truly of course).

Friday 20th April saw the vast majority of riders attend the sign on and gravel expo at Kielder Castle. One drop out due to injury was not a bad ratio, still 11 riders on the line made us the largest represented club there by far. A few beers and grub at the Anglers Arms, and I admitted that tomorrow maybe a little tougher than I may have indicated in the past. Fair warning of Jimmys Gate descent after the second feedstation, and the huge climb for the 200 riders after the 115km turn off for the 130 riders was given. After one last wander around the expo to pick up some free swag (cycle caps, tyre levers, sealant and stickers galore) I made my excuses and returned to the lodge to give the bike one last check over before the morning.

5:15am, early to rise, quick wash, toast and a cuppa. Check the tyre pressures (38mm Panaracer Gravelking SK’s 35psi front, 38psi rear) and I was out for a small ride around Leaplish to the entrance to meet my mate Will for the lift up to the Castle. I was already out of breath when he pulled up, having chased a deer along the lane to try and get a decent GoPro shot (I failed). Will had forgotten all his tools and tubes so a quick scrabble around for spares was carried out.

We arrived at Kielder Castle in good time, with a plan to meet all the NTR lot on the left hand side of the start line for a group shot. With over 750 riders milling about, it’s fair to say I failed big time there but I did manage to meet Barry, Gary Legg and Craig Usher. A few nervous start line selfies and trying desperately to hear the PA announcements and we finally heard the countdown for the start… 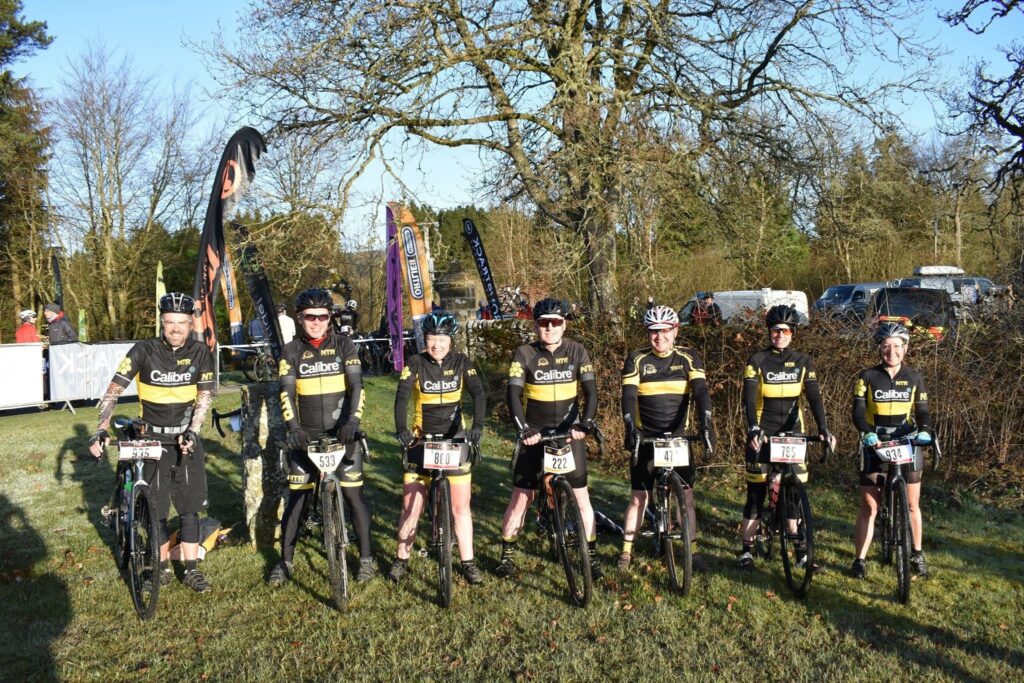 A rolling start at 7:30am. We hit the first small climb of the day, roll past the timing sensors and we’re away… 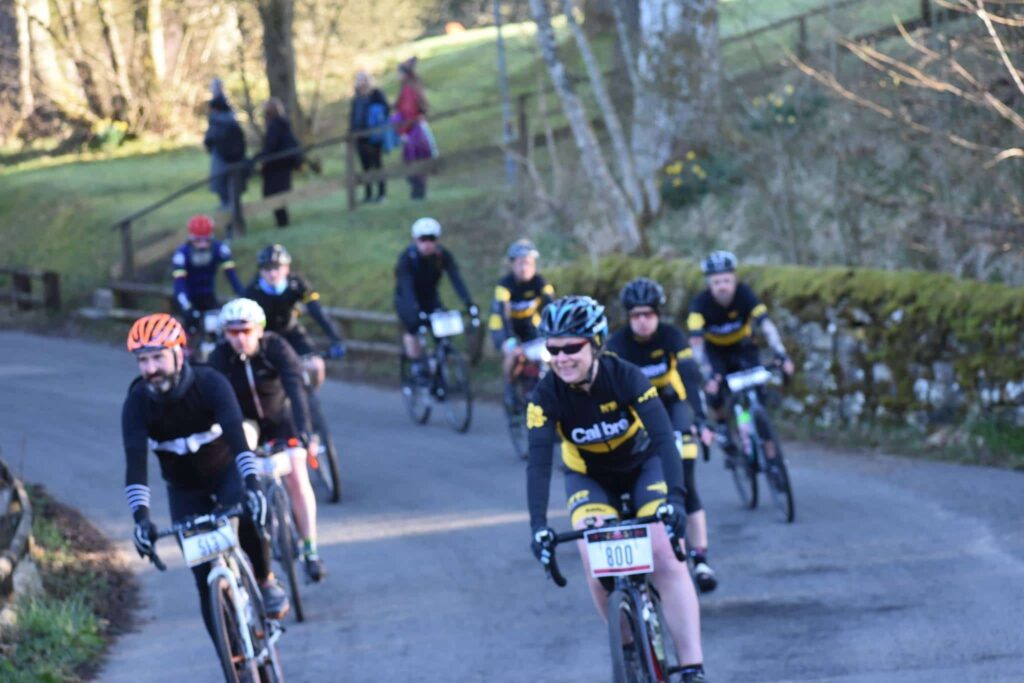 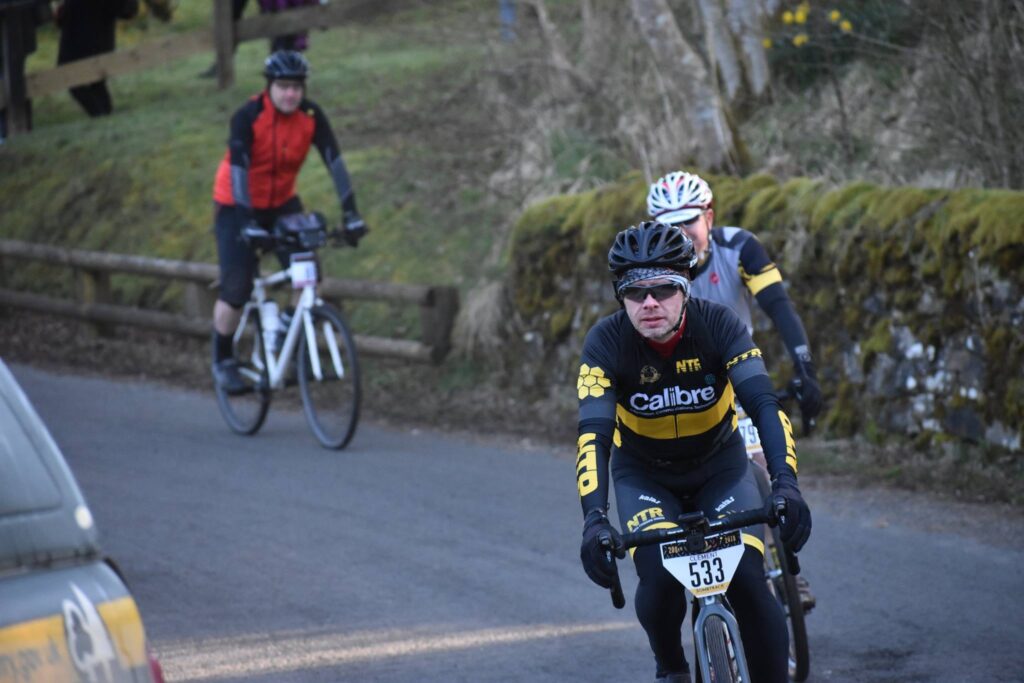 And so starts the day, already I felt much stronger than in 2017, but I still stop half way up the second climb to help a rider out with a dodgy chain. On the second descent I get a cheeky slap on the bum from Gary Doig as he passes, and also see Clem pass me on the descent. Chatting to Will today, we both agreed a staggered start is safer as it breaks the groups descending up. Having said that, I found I could tag on to someones wheels on the climbs this way, way easier than I did last year. We descend back down to the lake, a quick blast along it and then we get in to the gravel proper.

Long warm climbs soon find riders peeling layers off. I stop to take my arm warmers and buff off. And push on. It’s not long before I catch up with Ruth, Paula, Steve and Caroline, nursing a to be soon beyond repair mechanical (more about that later). I pass them with a “you’ll catch me on the climbs” (they do) and push on. As predicted, they pass me on a long climb but we met again for an impromptu picnic at around 9:30am. The next time I’ll see them is at the 1st feed-station. 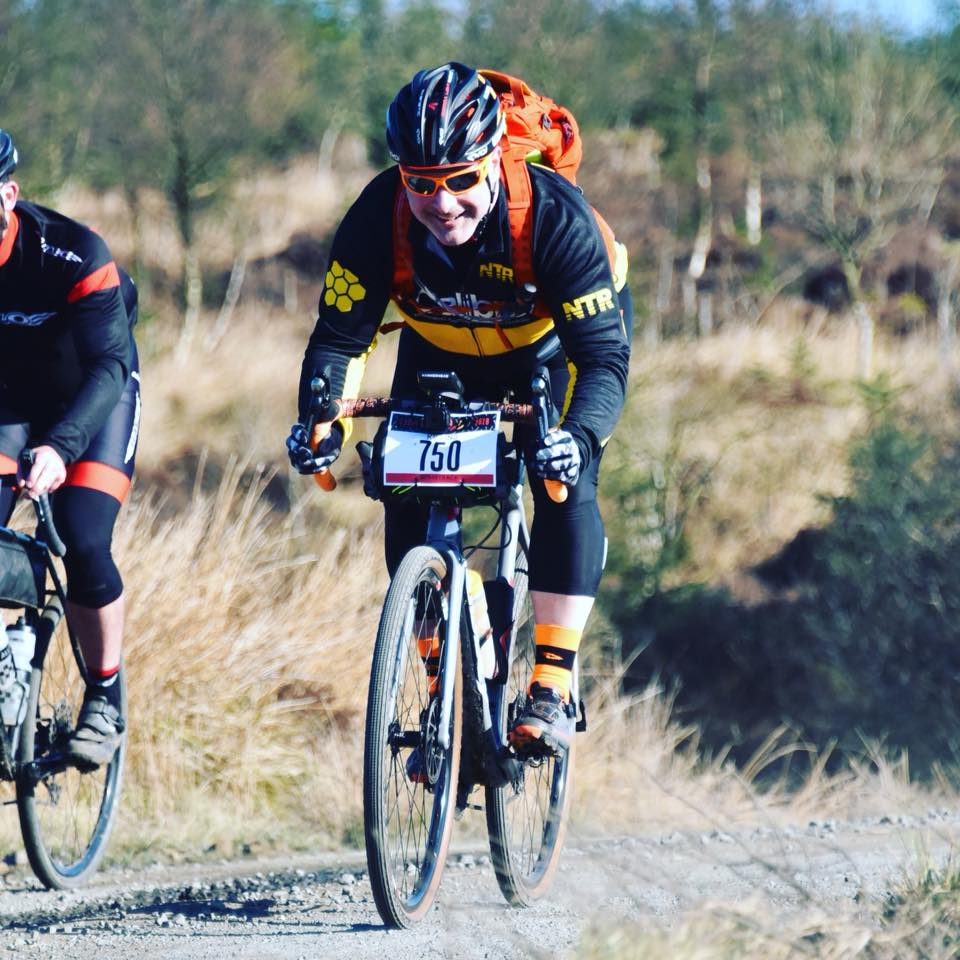 My memory of 2017’s attempt were I was struggling so much I was ready to abandon at that first feed-station. This year was a very different affair. No walking, no stopping to put warmer kit on, I managed to get to that first feed-station a good half an hour before I did in 2017. I met the NTR lot, shot the breeze, ate one of my sandwiches, topped up the sun cream, filled up the hydration bladder and bidon and pushed on with Barry for the two parts I wasn’t looking forward to, the river crossing and Jimmys Gate Descent… I let Barry go ahead on the long tarmac climb up to the trail that would lead me to these…

On the way to these I managed to catch up with Ruth who was at the side of the trail with Paula, Steve and Caroline watching her intently convert her what was a geared bike, now sans rear mech, in to a single speed. Just as well I did turn up, I was able to give them some zip ties, a chain tool and my leatherman pliers to finally bodge it together. I shot off leaving them to nurse Ruth along…

First the river crossing. I got there to find a couple of people had already ridden across, and the marshal helpfully said take the left hand side and you’ll be fine. I walked through it last year, so I was determined to ride it this year. I nailed it! Though I did get wet socks, so I pulled over, swapped the socks and settled back to see a few riders nail it and one fall right in. A quick look at the time, and I figured I’d wait 5 minutes to see if the NTR gang caught up, and low and behold they came round the corner. I set the GoPro up and managed to catch Ruth, Paula, Caroline and Steve all smashing the crossing like pros… Paula and I made our excuses and pushed on to Jimmys Gate descent (I let Paula push on at the first decent climb)…

Jimmys Gate descent is horrible. Rocks the size of your fist, slate jutting up in places and no smooth line to be found. You either love it or hate it. Having trained over some really horrible terrain over the winter I was well versed in weighting the bike over the worse of it. I was passing full suspension mountain bikes, so the skills were in full effect! Down in one piece, though having turned the air blue on more than one occasion, a welcome relief of tarmac to the next feed-station was a god send…

Before the second feed-station (the last one for us 130km riders) is a lovely long straight downhill tarmac section. Head down, on the drops, arse in the air lovely. I pulled in to the feed-station with a huge grin on my face, to find Paula and Barry. After a quick catch up with Paula (who was about to push on) and Barry I hit the food, hot spicy rice, victory chimp energy bars, salted nuts and jelly babies. Hydration bladder and bidon filled and Barry and I took the long slow hot climb out of the feed-station. I let Barry push on, the heat was overwhelming I needed a breather. Eventually I got to the top to a wonderful breeze and the shade of an oak tree. A few other riders had the same idea. Cooled down, watered and air in the lungs again I pushed on.

The next section saw a rough forest road descent down to the border between England and Scotland. A quick blast across the bridge to Newcastleton and I was in Scotland. Riding the Reivers route along to the next bridge back in to England is rough. With 110km under the belt the toll on the body starts to show. I stopped in the shade to chat to a couple of chaps, rode on and stopped about 3km down the trail again on a nice mossy outcrop. I finished off the last Peanut Butter and Jam sandwich, snaffled a couple of chimpanzee energy sweets and got myself set for one last push to the finish. Caroline and Steve passed me here, and let me know Ruth had had to retire due to her bike. What a shame!

The bridge back in to England was a relief. The climb after it was not. It’s not long, just a 100 metres or so, but easily 30% if not more. I could see a group of people at the top of it so I got off and walked. No shame! After passing the chatters, I managed to get back on the bike and push on. Passing a forestry worker “it’s nice bit of downhill now” was a good sign. Cool air, blasting down gravel, I was getting a second wind. I passed East Boldons Scout group on a Bothy trip and could see the 200km and 130km split in the distance. As I got nearer there were signs on the sound of the trail “have you earned your banana?” “are you a chicken?”… What the hell? As I got nearer it became more apparent. At the split was Bananaman and Chickenman. If you took the 200, Bananaman gave you a Banana, if you took the 130, you got cow belled by Chickenman. Hahaha! Brilliant. Sorry Bananaman, I’m taking the long descent down to Kielder!

And so, blasting down the gravel road back to the lake is a brilliant feeling. I passed a woman, knackered she asked “is there much further to go?!”, nope I replied, you’ve about 5km to go. Back along the side of the lake, merging with the 200k riders we were all mixing with tourists out to enjoy the sun on their bikes. I stopped for one last photo at Pattersons Corner, and once back on the bike recorded a wee message for the Dirtbags. I followed two ladies the last couple of km’s to the finish, and once I was on to Castle Drive I could hear the cheers and cowbells, what a rush! Michele, Mikey (and his mate Josh), Ruth, Malcolm and Gary Doig were there to cheer us in, awesome. Seeing Gary showered and in his civvys was a shock! He had put in a blistering time with Clem, but they had both turned off to do the 130 rather than suffer the 200. 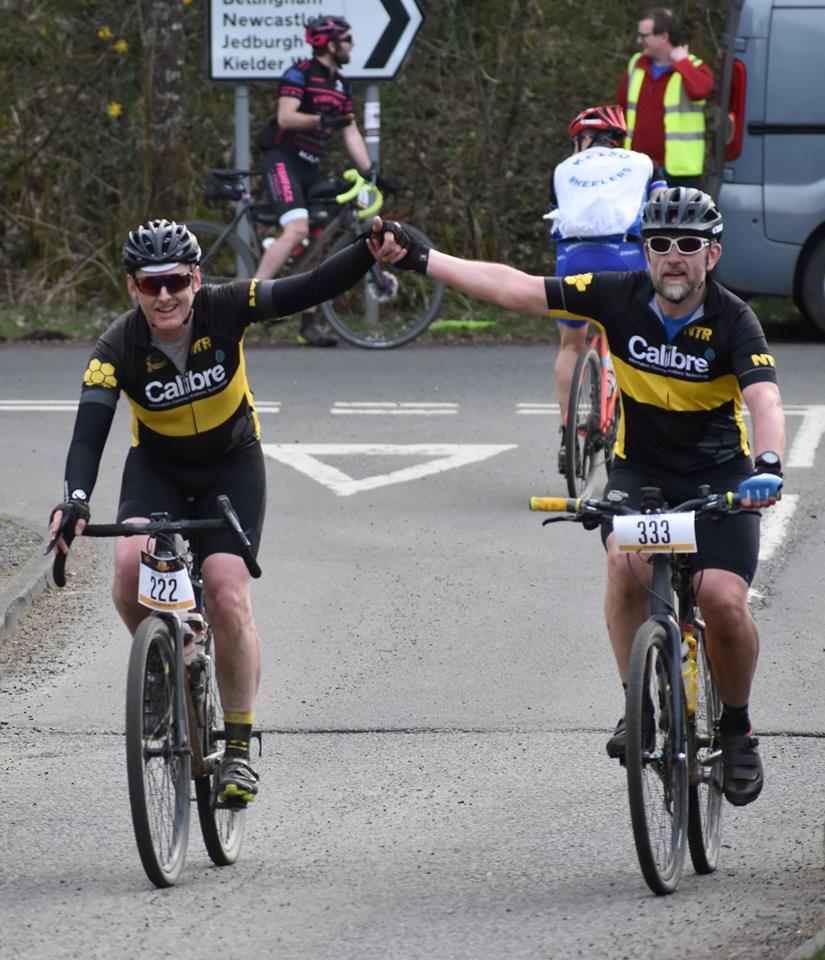 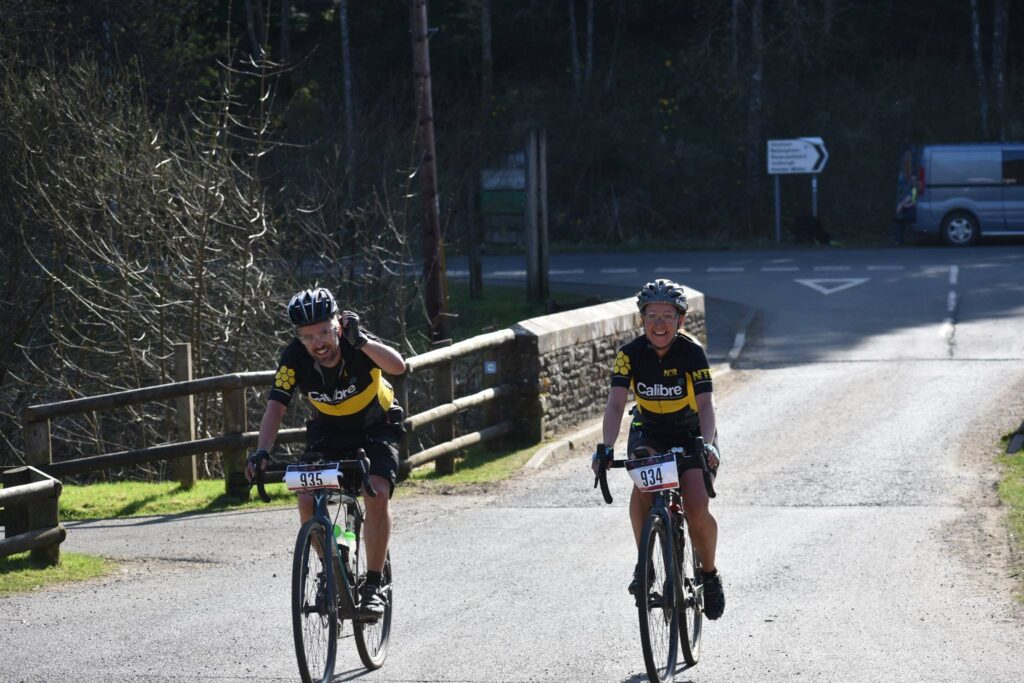 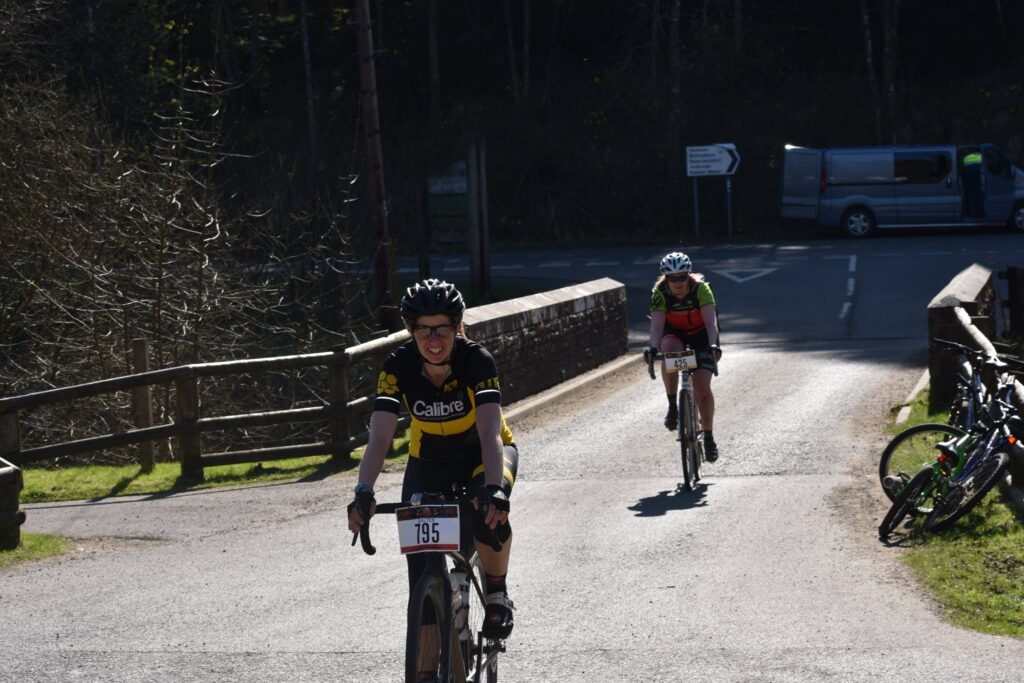 I was met on the line by Paul, a hug, a beer, I picked up my time, my patch and my ticket for free scran. I parked the bike, got a hug off Mikey and Michele and went to grab my food. Veggie chilli, bread roll and delicious cake, I managed to find Steve and Caroline. We were soon joined by Barry too. After swapping war stories we went back down to “NTR Corner” to cheer in the rest of the riders, hoping to catch Will, Gary Legg and Tony Douglass. They rolled in an hour later, all with the full 200km under their legs. Absolute top efforts and huge respect. 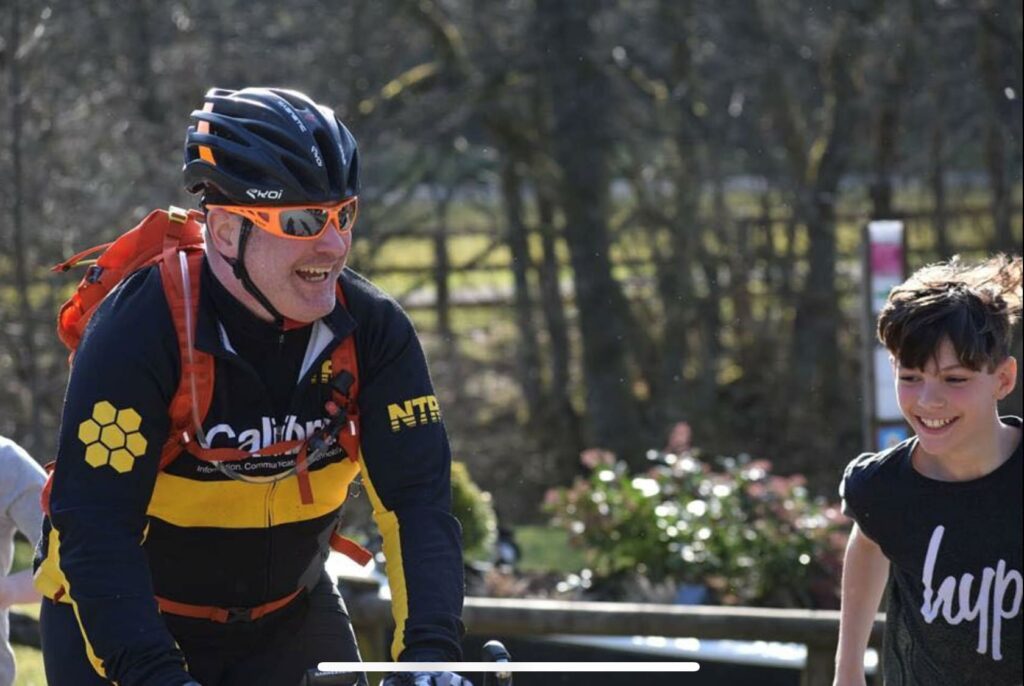 And so, another year completed, 11 riders all accounted for, 10 finished, 1 had a mechanical. My dream for 2019? 20 riders. If we can do that we will show how NTR truly is the largest club in the North East, and one diverse enough to do truly epic rides away from the road. 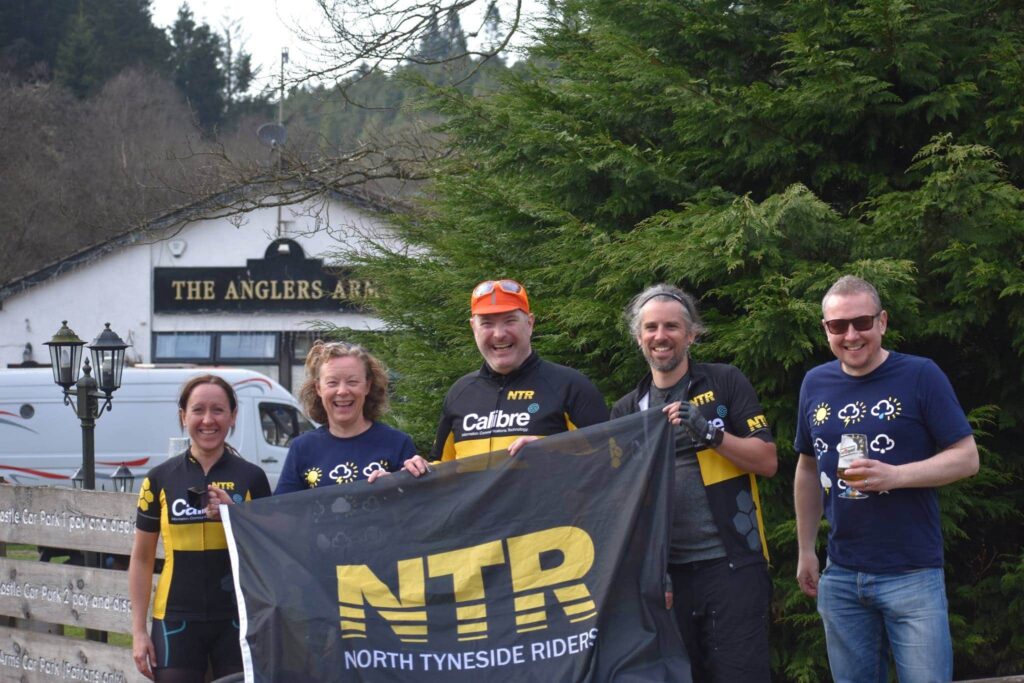 Come on Dirtbags, you know you want to  ?