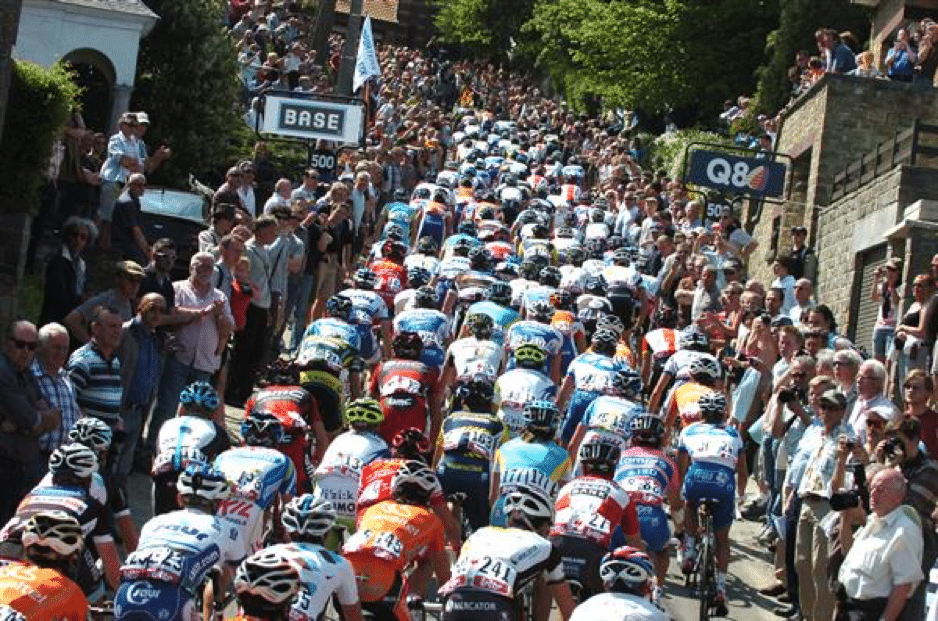 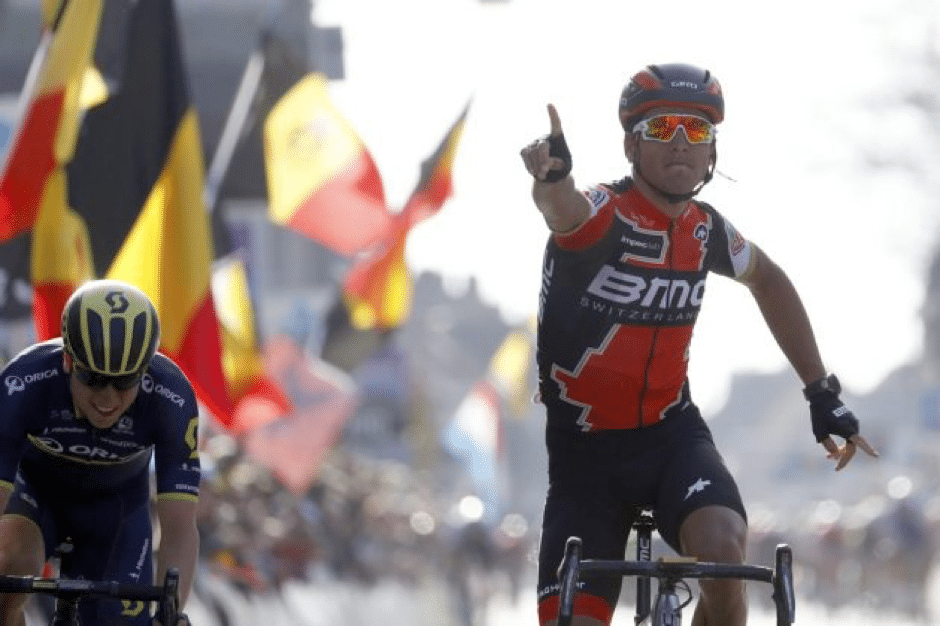 Greetings Bike Lovers, what a March we’ve had, as the Spring Classics swing into action. After the televised training rides in Australia, Dubai and Oman, real Bike Racing has exploded onto our screens with a superb start to Spring.

Strade Bianche kicked March off in style, the wonderful scenery and White Roads were dampened down by the rain, but the racing definitely wasn’t. Tim Wellens kicked off the attacks, looking like the favourite, but Michal Kwiatkowski went with 15km to go, and soloed to his 2nd victory in this race. My man of the month, Greg Van Avermaet served notice with a second, with Wellens third.

Sergio Henao recorded his maiden tour win in Paris Nice, bringing a little sun into Mr Brailsford’s life, after a somewhat prickly winter. Henao took the win by being the most consistent finisher on all key stages. Julien Alaphillipe, Simon Yates, and Richie Porte all took excellent stage wins, while the old fox, Alberto Contador, did what he does best and attacked when nobody was expecting it, with 50km to go on the final stage. He’s pulled stunts like this throughout his entire career, which begs the question as to why nobody expected it? And how close did he get? Two Seconds, after 8 stages, he lost by Two whole seconds. Being a bit of a Contador fan, I was distraught. If he could actually win a sprint, he’d be lethal.

Tirreno Adriatico took place later in the same week, and for a change, featured very little in the way of exciting racing. Apart from an exploding wheel on Team Sky’s Gianni Moscon’s TT bike. Geraint Thomas claimed a good stage win, but Nairo Quintana sailed away up the Termanillo to claim another GC win, announcing himself clearly as the man to finish 5 minutes behind Chris Froome at the TdF this year. 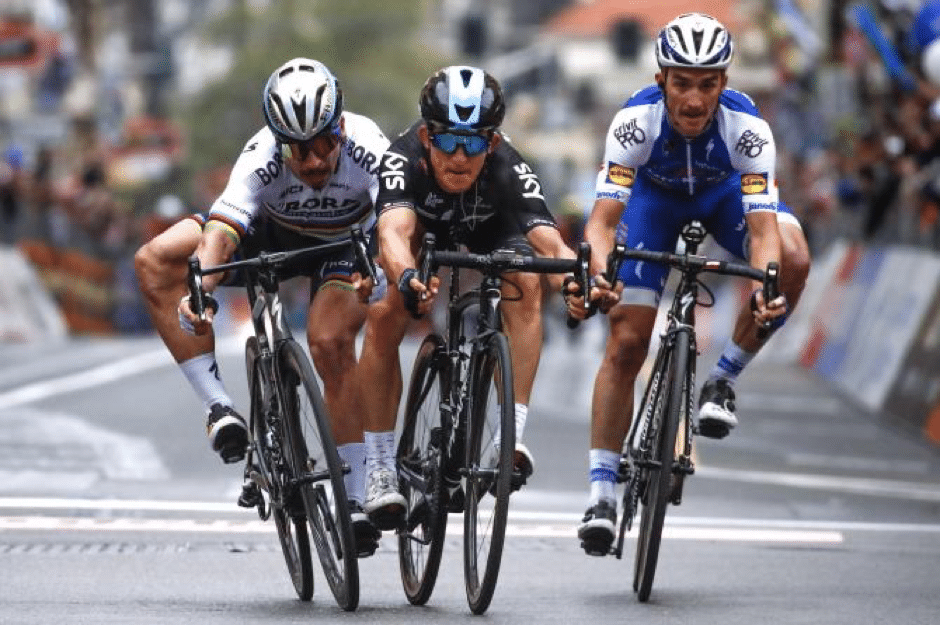 Milan San Remo produced what will possibly go down as the photo of the season, and was the traditional slow burner of a race as always. Patience is the name of the game in this race, for the viewer, and the rider. The war of attrition had the Peloton whittled down to around 50 riders by the time we hit the Poggio climb, and Tom Dumoulin proceeded to set a frantic pace up front, attempting to set up Michael Matthews. Peter Sagan decided not follow the script and simply rode away, taking Julien Alaphillipe and Michal Kwiatkowski with him, none of the sprinters being anywhere near matching his pace. With Alaphillipe sandbagging, gambling on the group being pulled back. Kwiat managed to get Sagan onto the front, and mugged him, pulling off a shock win. Quick Step once again illustrated that there is no team in Professional Cycling as capable of throwing away a big win as them. Patrick Lefevre was rumoured to have blamed the result on Brexit, and the subsequent economic downturn.

Meanwhile, in Catalunya, the race organisers put on a fantastic parcour, that was unceremoniously smashed by Alejandro Valverde and Movistar. In the stage 2 TTT, Movistar were penalised one minute as Jose Rojas decided to give a couple of his teammates a little push along, losing them a minute, eventually, after the organisers decided that they didn’t really want to punish a Spanish team. The rest of the week was a Valverde Tour de Force. 3 stage wins, and a comprehensive win on GC, in perhaps one of his easiest Tour wins. Too easy? Valverde’s past indiscretions will always cast suspicion on his wins, but I’m pretty convinced he’s clean these days. Just like I was convinced that Armstrong was never on the juice……..

Flanders week began last Wednesday with Dwars Door Vlandaaren, the unofficial warm up for La Ronde. Cue Greg Van Avermaet v Peter Sagan Round 2. After they crossed swords in February, the two immovable forces of the Spring Classics went toe to toe again. Not on the Wednesday though, as Quick Step nailed their first big win of the season. Yves Lampert went away, apparently to soften up the chasers in order to set up Phillipe Gilbert, and was promptly given enough of a lead to comfortably win by 39 seconds on the line.

Only a couple of seasons ago, this wannabe pundit labelled Greg Van Avermaet “Mr Second” after a string of races where he seemingly threw away victory. While the obsession with stopping Peter Sagan from winning continues to grow, GvA has slipped under the radar and bagged himself a weekend double by winning GP E3, and Gent Wevelgem. Phillipe Gilbert was instrumental in pushing the break, which eventually whittled down to GvA, Gilbert, and young Belgian Olivier Naesen. The sprint in the end was fairly easy for GvA.

On Sunday in Gent, GvA was once again probably the strongest rider, and also benefitted from the new phenomenon “Sagan watching” The Belgian got away in a small break, the rest of the Peloton simply waited for him to bring them all back into contention. He politely refused. GvA went onto beat Orica’s Jens Keukeleire in the two up sprint to complete the double. Sagan made his point by winning the sprint for third, but has showed his increasing maturity in preparing to lose.

So, to preview my favourite month in Cycling, I firstly have to apologise for my woeful tips in March. Apart from mentioning Van Avermaet looking strong, I failed to predict any winners. I sincerely hope none of you rushed off to the betting shop after reading this column. 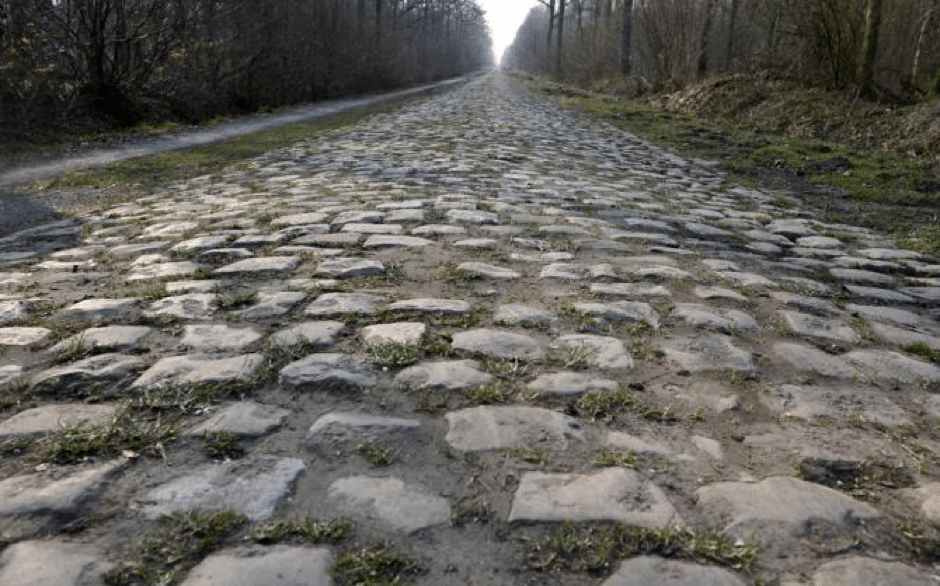 Cobbles. This weekend sees the Ronde Van Vlandaaren role out of Antwerp, covering 260km of windy Belgian roads, including 18 official Bergs, many cobbled. This year sees the return of the famous Muur Van Gerardsbergen, although it’s much earlier in the race than it should be. The race will be sorted out on the final circuit, including two ascents of the Oude Kwaremont, and the Paterberg. Peter Sagan powered away to win last year, but I’m going for Greg Van Avermaet to finally win his biggest race, and the one he wants the most. He has the form, and the experience needed to win this race.

The following Sunday is Paris Roubaix, a race I’ve been to see 4 times, back in the old EPO addled 1990’s and early 2000s. If you ever go to see a live bike race, make sure it is this. You’ll never experience a sporting event like it. The roads have to be seen to be believed, and the speed over the cobbles never fails to amaze me. This year sees the retirement of Tom Boonen, wo is making one last attempt to secure his 5th Paris Roubaix win, which would stand him alone at the top of the all-time winners list of this great race. Sadly, I feel that he will come up short, and my bet is Peter Sagan, who has made no secret of his desire to win this great race. I will then have to search for another Flemish hero worthy of my man love, as the mighty Tom pedals into the sunset.

April also means the Ardennes Classics, with steeper, longer climbs like the Muur de Huy (Picutred Above) This sees the emergence of the lighter men, with the odd Tour contender making an appearance.

Amstel Gold and Liege Bastogne Liege are much harder to predict. Amstel has changed it’s route this year, avoiding the Cauberg for the first time in years. In a complete guess, I’ll take a punt on Kwiatkowski to take his second win in the race.

The Fleche Wallone has pretty much exclusively belonged to Alejandro Valverde in recent years, although after so many near misses, I’m going for Dan Martin to finally time his attack right.

Liege will once again brutally break the Peloton down with it’s relentlessly tough parcour. After a good Spring, I’m taking a punt on Phillipe Gilbert to win one last big one before he starts winding down.

Now, if this little lot isn’t enough for you, we also have the Tour of the Basque Country, and the Tour of Romandie. Six stages apiece, both relentlessly hilly, both likely to be targeted by potential Tour de France winners, with winners such as Contador, Froome, Wiggins and Quintana on the roll of honour.

I’ve actually no idea how I’m going to fit in riding my bike with this feast of Pro Racing. Anyway, enjoy, and I hope you will join me next month in order to laugh once again at my woeful predictions.