Murray recently asked me if I’d like to contribute to the Club Website, by putting together a little column dedicated to the Professional Road Racing scene. Much like the Mafia, when the Captain calls, you answer the call. So what did we learn from the 2016 Road Season? Here’s the way I see it.

Despite what the UCI calendar says, the Pro Season doesn’t start at the Tour Down Under, it starts in Belgium, at Het Niewsblad. I remain steadfast in my belief that the sunny training ride is not comparable to Rain, Wind, Cobbles and Mud. We would see the first of many clashes between Greg Van Avermaet & Peter Sagan at the Omloop Het Niewsblad with GvA getting the better here. Previously labelled as Mr second place, the Belgian suddenly started winning. Strade Bianche continued its amazing rise as everybody’s favourite classic. For such a young race, it’s already gaining status just below the Monuments. Stunning Scenery, White Roads, and probably the most beautiful climb up to the finish in Siena have established its place. 2016 also saw the last great win for Spartacus, the great Fabian Cancellara. He even won a 2 up sprint. Stuff of legends. Paris Nice & Tirreno Adriatico both suffered under the UCI’s new “Extreme Weather Protocol” and both races lost their vital stages as a result. Geraint Thomas & Greg Van Avermaet won respectively, giving credence to the claims that the races were devalued as a result of these stages. Milan San Remo moved back to a Saturday, which is only right. The entire Karma of the Spring Season was upset when it moved to a Sunday. The most amazing thing happened in this year’s race, a Frenchman won it. Now I try not to be too harsh about the French, but classics aren’t really their thing bless them. Somehow, Arnaud Demare got himself in the mix after the 295km lead out, which the race has now become, and won the French their first monument in years. Back in Belgium, E3 and Ghent Wevelgem were marred by the tragic death of Antoine Demoitie, in the latter after a collision with a Motorbike. The Race result was irrelevant.

April means Classics. Flanders kicked the month off, and it was a stunner. Peter Sagan offered out “The Curse of the Rainbow Jersey” and promptly gave it a jolly good hiding. He was imperious in one of the toughest races on the circuit, winning by almost 30 seconds. Fabian Cancellara was shown the respect of being allowed to ride alone over the line in second to say goodbye to one of his favourite races. Lovely touch from Sep Vanmarcke. Paris Roubaix was an emotional one. The race of the tough men was looking like it might just come down to a battle of the greatest cobbled masters of our generation, Boonen v Cancellara. These just happen to be two riders I have an awful lot of man love for. I hold my hands up to being distraught when Aussie Matt Hayman won. On reflection, you couldn’t help but be delighted for the Aussie domestique, finally winning his Holy Grail on something like his 300th attempt at Paris Roubaix. Chapeau. The Flemish classics were dominated by the usual suspect, Mr Poodle Hair, Alejandro Valverde. He won his 19th Fleche Wallone, or at least that’s how it feels. The race turned out to be nothing more than a 199km warm up, followed by the slowest sprint in Cycling to the top of the Muur de Huy. Definitely a race to watch on Sky+. Liege Bastogne Liege offered up a shock right up there on par with Demare winning Milan. Sky won the race, and it was a Monument. Sky don’t win Monuments. Their efforts had been nothing short of comical over the last few seasons, so imagine my surprise when Wout Poels burst out of the small group to win.

May means the start of the Grand Tours, and the Giro D’Italia. Or as it’s more commonly known, a jaunt around the Ski Stations of Italy. Sprinters need not apply. The race finally saw the emergence of a Dutch challenger, something the country has been crying out for since Michael Boogerd hung up his wheels (And Blood Bags) Steven Kruijswijk was the class of the field, before snow blindness saw him ride straight into the snow wall at the top of the Agnello. Sneaky Vicenzo Nibali of sneaky Astana sneaked in to lift the Maglia Rosa, miraculously coming back in the final week after looking dreadful early. Did he have one of those famous Astana medical interventions, or is he just a good bike rider? All I do know is that seeing Alexandre Vinokourov’s smug smiling face at the finish in Torino made me sick in my mouth. I could never tire of punching him.

Into June, the lesser spotted Froome was seen coming out of his slumbers. The Criterium du Dauphine, or Tour de France dress rehersal as it’s also known provided us many answers as to who would come out on top in July. It’s actually a stunning race, taking in some breath-taking Alpine scenery, and provided many answers. The 1-2 would be the same as in Paris, Contador was fading, Dan Martin was marvellously entertaining without looking like winning, and Richie Porte would once again finish in Chris Froome’s wake. The Tour de Suisse also took place in June. Nobody noticed.

July can only mean one thing, Yellow Fever. Aka, Team Sky strangling the life out of the world’s biggest bike race. That didn’t actually happen this year, partly due to the fact that Chris Froome decided he was bored, and decided to head off down the road in perhaps the most terrifying descent I’ve ever seen. The other factor was that Sky didn’t actually need to strangle the race as nobody was good enough to challenge Froome. Nairo Quintana came up well short in July, Fabio Aru’s Astana challenge came to nothing, so it was left to the young guns, Romain Bardet, Bauke Mollema and Adam Yates to take the race to the gangly one. Sadly, for us viewers, this was about as one sided as a battle between one of Chris’ Pythons and one of the hapless rabbits he feeds them. The Unlucky Mollema fell off. Yates rode well above his supposed level, falling just short of the podium, but marking himself out as a future winner. Bardet sent France wild with a Stage win and a second place. Other notable rides came of course from Mark Cavendish, who flicked a giant middle finger salute to all of his doubters, me included, by winning Four Stages. Dutch tester Tom Dumoulin continued his almost inevitable path towards a Grand Tour win, taking yet another Time Trial, and his first High Mountain Stage. Peter Sagan laughed in the face of “The Curse of the Rainbow Jersey” by winning no less than 3 stages, and of course another Green Jersey. Bauke Mollema brushed off his injuries to win his first Classic at the Classica San Sebastian. Holland went wild.

The month that nobody can be bothered with started with a load of minor races that nobody can be bothered with, as they’re all earning loads of cash riding Criteriums. The only meaningful race was the Vuelta a Espana, my personal favourite Grand Tour, the race that simply doesn’t have any flat roads. This year’s Vuelta featured no less than 11 mountain stages, a handful of middle mountain stages, and 2 flat stages with mountain top finishes. Only at the Vuelta. Sprinters need not apply. Again. What we got was the best Grand Tour of the season. Stunning scenery, mountains so steep that you could barely drive up them, and a race that offered so much more than its French & Italian counterpart. Quintana & Froome took lumps out of each other at the top. The other Yates brother won a brilliant stage. Esteban Chaves proved again that he is a Grand Tour winner in the making. Alejandro Valverde almost achieved the unbelievable feat of finishing in the top 10 of all 3 Grand Tours, but for one bad day. Proper entertainment. I refuse to acknowledge the Olympics in conjunction with Road Cycling. This simply as the course was nothing more than an attempt to murder the finest cyclists on the planet.

September was a bit rubbish, apart from the end of the Vuelta.

October started with the fantastic Il Lombardia. The stunning race gave us a worthy winner as Esteban Chaves topped a superb year winning a Monument to put alongside his 2 Grand Tour podium’s. The race was another stunner around the Italian lakes, and Rigoberto Uran is still trying to work out how he managed to finish third out of three while being the strongest sprinter in the group by a country mile. The season finished in Doha at the World Championships. Nobody who witnessed Doha will ever forget it. Cycling is generally regarded as a tourist board advert for why you should come to a country. Doha it seems were trying to put us off going. The course was pancake flat, riding through deserts and partly finished building, fighting heats of almost 50 degrees. Cyclists passed out, nobody came to watch, and the entire thing was on the verge of descending into farce. On the plus side, Tony Martin put in a superstar ride to win the Men’s TT, riding fast enough to place sixth in the Team Time Trial. Nothing stops the Panzerwagen. Against all of the odds, a thoroughly entertaining Men’s Road Race broke out. The wind broke the Peloton into pieces as the race entered its final laps. Despite various break attempts, tactical skulduggery, it came down to the sprinters finale we all expected. Peter Sagan punched “The Curse of the Rainbow Jersey” right in the face, and beat a disbelieving Mark Cavendish in the last few yards. The man has now elevated himself to a serious level. Grand Tour wins, and immortality surely follow. Well that’s it for the first column. Next month will feature a preview of the 2017 season, some predictions, and early action from the Tour Down Under, despite the fact it isn’t a real race, and is really a sunny package tour for professional cyclists. Keep it real, keep riding through the winter. Think Belgian, be Belgian. Grant 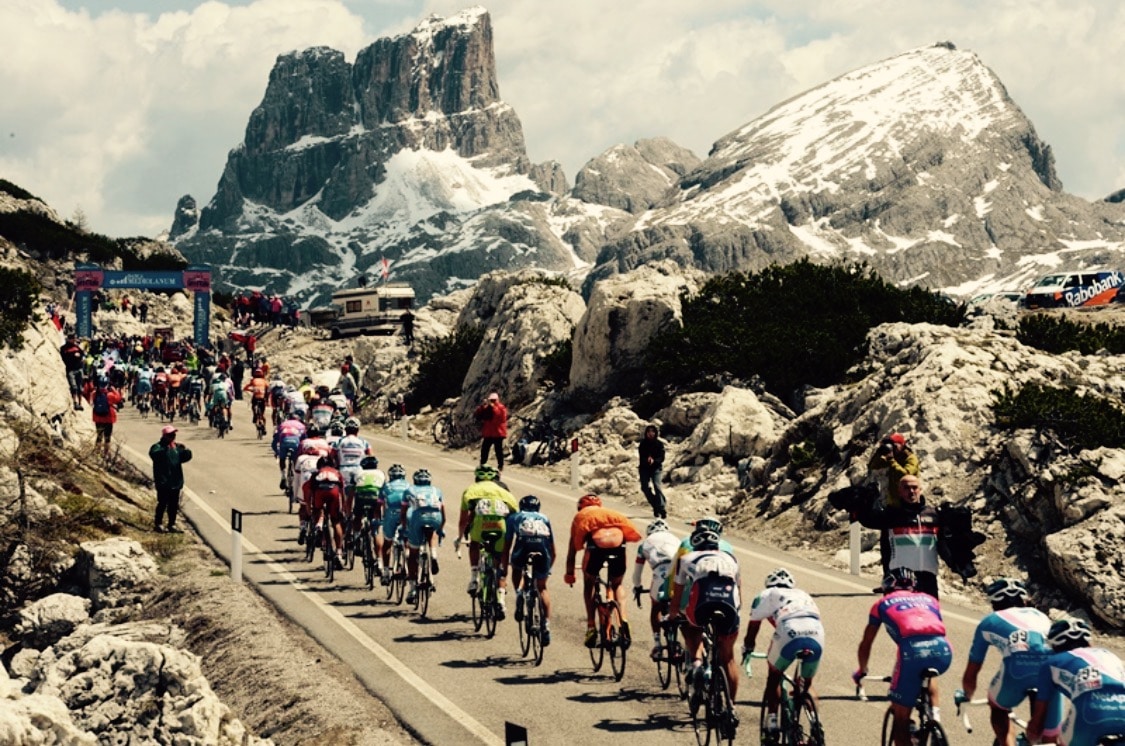 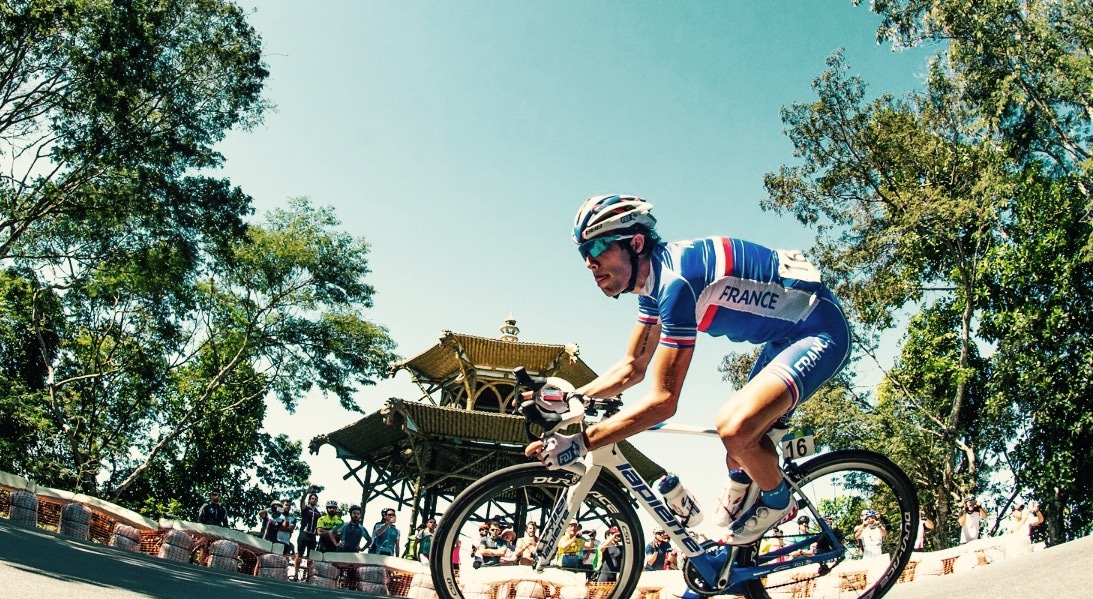 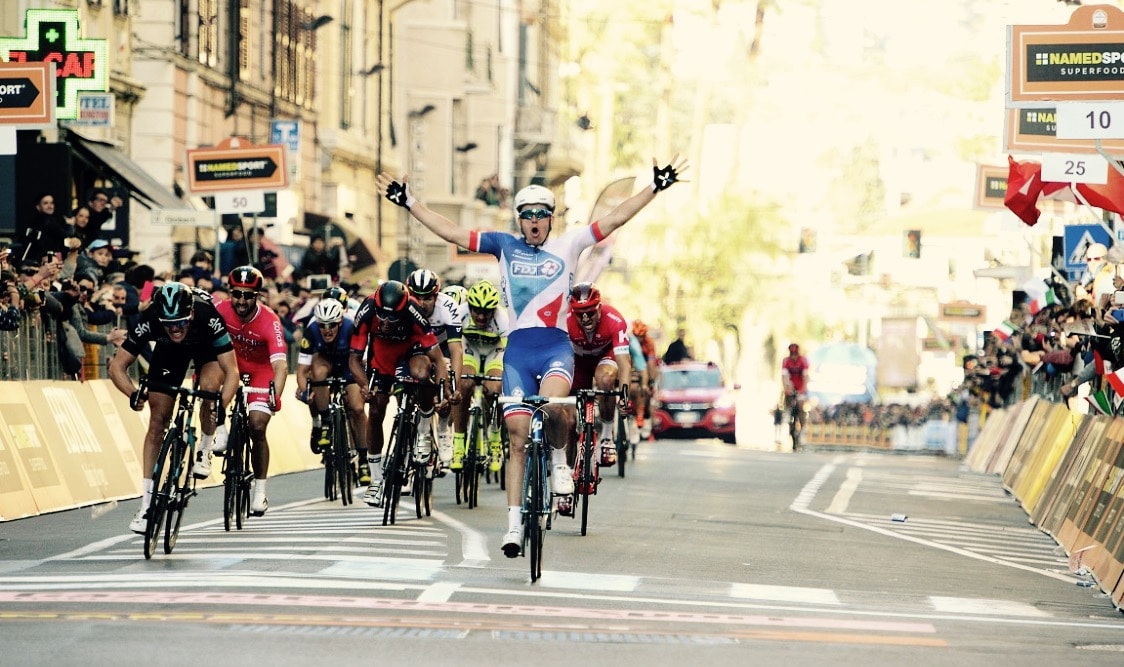 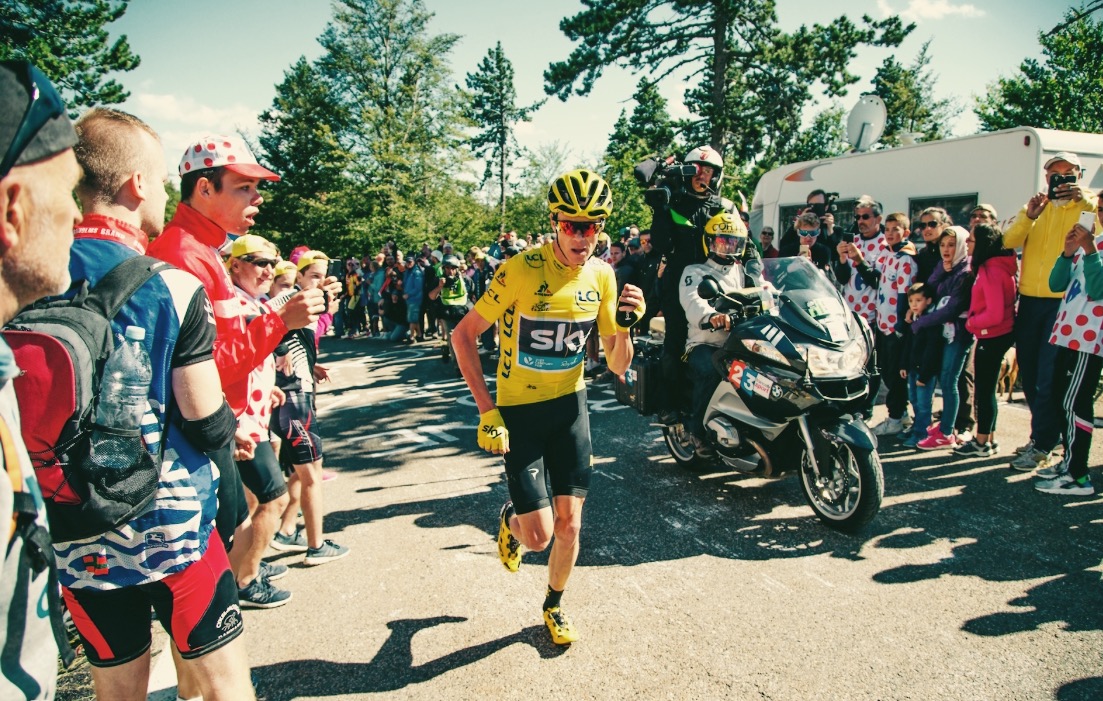 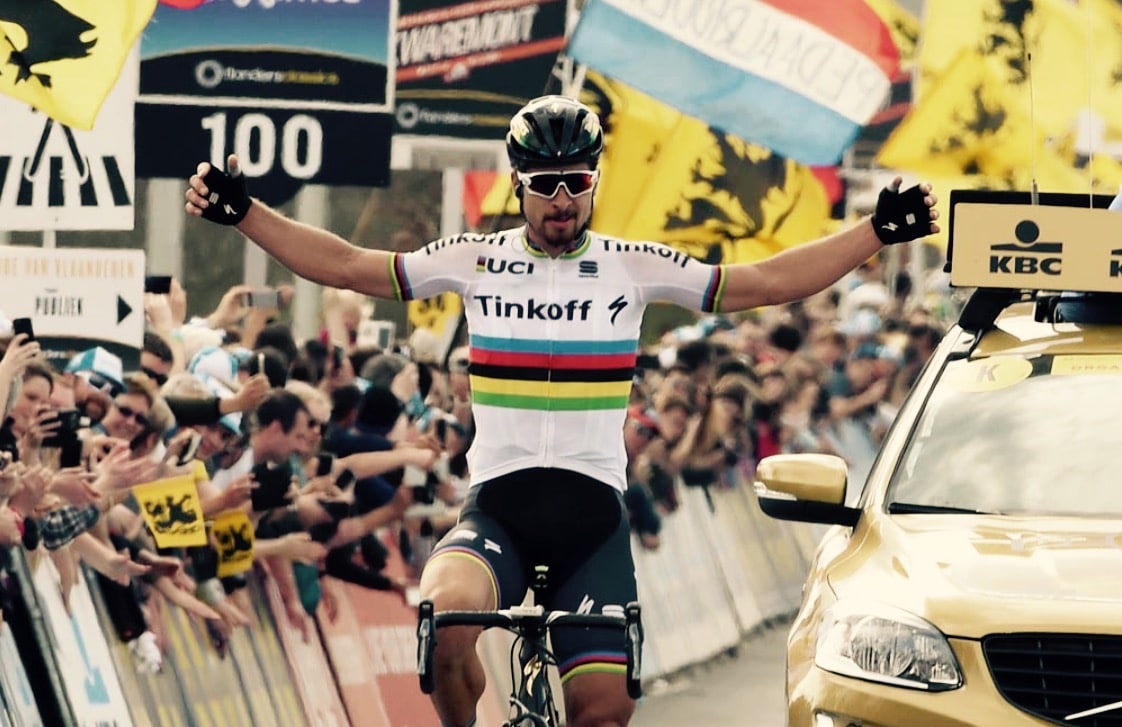